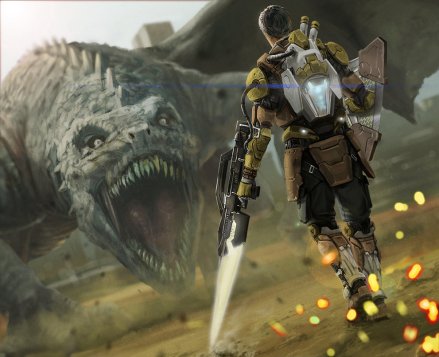 Hansen’s radio crackled in his ear. “Hey, captain?” came the voice of Jirra. “We’ve, er, got some heat signatures moving in towards you.”

“Captain?” called Jirra’s voice again. “There’s one big one, sir. Right in front of you, almost on top of you. Do you read? Can you confirm visual on it?” Jirra paused for a minute, musing. “It’s weirdly hot,” he said, more to himself than to his ship captain, down on the planet’s surface. “Almost like it’s on fire.”

He didn’t hear anything from the other end of the radio connection. “Captain?” he tried again. “Are you there? Can you confirm that the planet is inhabited?”

Jirra tried again. “It’s inhabited? Are the inhabitants friendly, do you think?”

Trying not to make any sudden movements, Hansen stared at the huge, hulking reptilian monster in front of him. “I don’t think so,” he whispered into his microphone, watching the monster stare at him with lidless eyes, set deep into the skull beneath a very large mouth.

A large mouth filled with teeth, he observed a second later, as it opened. Big teeth. Sharp teeth. Pointy teeth. And behind them, was there some sort of glow, coming from down its throat…?

“Captain?” Jirra called out a second later. “Something’s strange – the signal just jumped up a level in intensity, like it got hotter. Our systems might be malfunctioning…”

“No, it’s not you!” Hansen shouted, desperately hauling himself up from where he’d thrown his body prone in the dirt. “It’s breathing fire! Dragon! Dragon!”

Jirra frowned at the controls. “Dragons? What, like the old monsters from fairy tales? Sir, are you feeling okay?”

“Shut up! It’s real!” Hansen scrambled for his Expeditionary Rifle, thanking the designers for physically linking it to the Power Pack he wore on his back. That connection sometimes got in the way, but at times like this, it proved invaluable. He drew the weapon up, his hands shaking as they tried to grasp the controls.

“Hansen, should we send down the shuttle? It sounds like you believe that you’re fighting a dragon,” Jirra tried again. Hansen gritted his teeth at the calm, incredibly irritating voice of his Navigation Officer on the comm.

“I am fighting a dragon,” he emphasized, once again throwing himself out of the way as the dragon turned towards him and, with a roar, unleashed another gout of flame from its mouth. “And don’t send down the shuttle! Not yet – this thing will just rip it to pieces!”

Jirra said something else, but Hansen wasn’t listening. Finally, he managed to lock the Expeditionary Rifle into the “armed” position. It hummed as power from his pack flooded into it, highlighting its glowing charge cells.

He spun back around to face the monster – and just barely dodged out of the way as it lunged forward towards him, snapping and swinging its claws. “Not happening, beast!” he snarled.

He moved aside – but it was a close thing. Hansen felt the whoosh of air as the beast’s jaws snapped shut only inches from him. He swung out with the rifle, smacking it in the nose.

“Yeah, keep back!” he warned, as it drew back in affronted surprise. “I’m not prey! Look, if you can understand Galactic Standard Speech at all, my name is Ian Hansen! I’m the captain of the UGS Hextech, positioned in orbit, here on a standard survey-”

The rest of his words were lost in the roar of flame jetting out of the monster’s mouth, nearly setting him ablaze. If his reflexes had been just an iota slower, he considered, he’d currently be described best as “crispy.”

“Fine,” he growled, spitting out dirt and twigs as he rolled back upright. “So you want it like that, huh?”

“Sir? Are you alright?” asked Jirra once again in his ear, even as the massive lizard let out a deafening roar.

“Shut up!” Hansen shouted, not sure which irritator he was addressing – or both. He pulled the trigger of the Expeditionary Rifle, and a full charge of crackling, devastating energy lanced out, blasting a massive hole in the monster’s chest.

The dragon crashed forward, its chest cavity smoking even as it landed in the soft earth. Hansen kept the rifle up and pointed at the creature’s head, ready for a second shot, but it didn’t seem necessary. Finally, he forced himself to draw in a long breath and then let it out, slowly.

“Jirra, ready to be recalled back to the Hextech,” he said. “Confirm that planet is inhabited and hostile. Ready to move on to the next location.”

For once, miraculously, Jirra didn’t ask for clarification. Perhaps he heard the barely contained frustration and anger in his captain’s voice – or maybe he’d heard the roar of the Expeditionary Rifle firing.

“Preparing to beam you up, sir,” he said. “Stand still, initializing…”

Just before he teleported away, Hansen stuck out his tongue at the massive corpse beside him. “Dragon,” he growled. “Of course, I’m stuck dealing with a dragon.”