“Hey, Teddy,” I called to the bearded man sitting outside my morning Starbucks stop, his battered piece of cardboard clutched in grubby hands. “How’s the morning?”

He looked up at me, his eyebrows drawing together with distrust – but then smoothing out as he recognized me. “Fancy Dave!” he answered, pulling back his lips to show me a grin mostly bereft of teeth. “And how is selling the world today, eh?”

“Oh, usual. Same as always.” I reached into my pocket, feeling around for a dollar, maybe a few quarters, whatever I had for loose change. It was mostly automatic by this point, a ritual that had become ingrained in my morning routine, as unthinking as pulling on socks before shoes. END_OF_DOCUMENT_TOKEN_TO_BE_REPLACED

I groaned at the man standing on my doorstep. “Come on, it’s not even eight in the morning,” I sighed, reaching up to rub at my sleep-addled eyes. “Can’t you give me a couple hours to drink my coffee, at least?”

He, of course, didn’t bother with any small talk. I guess the niceties fade after a few eons in Hell. How long is an eon, anyway? “You need to take it back. The deal is off.”

Instead of answering, I brushed past him, heading to my beat-up little car, parked down at the far end of the lot. I vaguely considered aiming a half-hearted kick at the Hummer parked crooked across two spots, but decided against it. The thumping echoing through the thin walls of my apartment last night told me that Kelsey, downstairs, had found a new boyfriend. His choice of vehicle told me that this one wasn’t likely to be any more permanent than the others that cycled through. END_OF_DOCUMENT_TOKEN_TO_BE_REPLACED

I looked in mounting horror around the room as, over cooling cups of coffee and slightly stale donuts, my colleagues seemed poised on the brink of chaos.

“Come on, doctors, we can’t be serious about this,” I said, still trying to cling to the faint belief that it was all just a joke, some sort of elaborate prank show attempting to pull the wool over my eyes. “There’s no way that we can recommend this.”

The guy sitting closest to me, a short, balding, pudgy fellow whose name I couldn’t quite recall, turned to me and rolled his eyes. “Dr. Stanley, let’s just get this over with so we can all go home,” he sighed. “We’ve got other things that we want to do with the rest of our day, you know.” END_OF_DOCUMENT_TOKEN_TO_BE_REPLACED

Twelve hours later, I sat in some greasy little no-name diner, my mouth full of hash browns as I stared, transfixed, at the screen of my phone in front of me.

With Derek passed out in the living room, it hadn’t been hard to figure out how to invite myself to join the closed forum. Just for good measure, I went ahead after confirming that the invite worked and deleted Derek’s own membership. The thought still brought a savage little grin to my face. Let’s see how well he survives without his cheating network.

He was drunk; I knew that immediately, from the moment he walked through the front door of our apartment. His footsteps were uneven; he slammed the door too hard, cursed a little too loudly as it rebounded off the frame.

I stepped out from the kitchen, eyed him up and down. It wasn’t the right time for me to tell him how I really felt, about the half-packed suitcase stowed away at the back of my closet where he’d never find it. Instead, I settled for just raising one eyebrow. 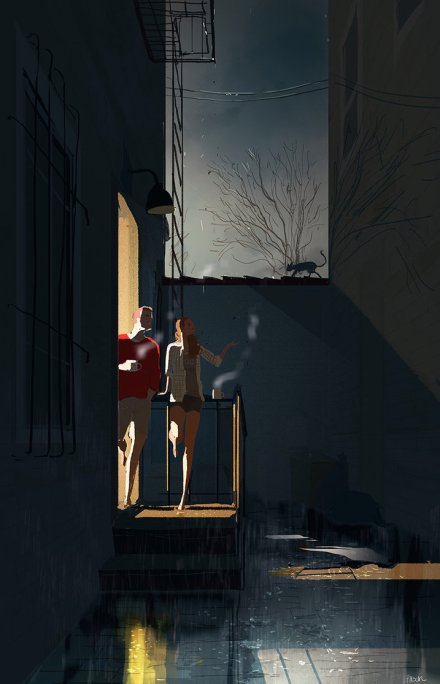 Pitter patter. That’s the right sound, she thought, looking past her reflection in the glass of the sliding door. This is a pitter patter kind of rain.

She heard his steps from behind her. She didn’t turn around as she listened to the clink of mugs in the cupboard, the splash of coffee from the machine pouring into first one cup, then the other. The fridge hissed as he pulled out the creamer, added a splash to her cup. The ring of a spoon as it clattered against the inside of the mug.

“Still raining?” He handed the mug over to her; she wrapped her fingers around the ceramic to absorb some of its warmth. END_OF_DOCUMENT_TOKEN_TO_BE_REPLACED

It’s a feeling that I don’t think I can put into words. Maybe the word for this feeling hasn’t been invented yet.

Bending down to tie my laces, I have to fight back a yawn. The yawns always come when I drag myself out of bed. It’s not that I’m tired, that I don’t get enough sleep (although that’s definitely a perennial problem of mine). I think that my body knows that the rest of the world is asleep right now, and it wants to join the sea of other dreamers in slumber.

Sometimes, it’s almost overwhelmingly tempting. It would be so easy. I could just crawl back into bed, back into that warm spot under the covers, close my eyes and drift immediately back into my half-broken dreams. No one would ever know if I skipped a day.

Still, I resist. I go through a few stretches, feeling the tightness of spending hours lying in the same position. I shake out my arms, listen to the rustling of the fabric of my jogging shorts. I tie my laces, re-check them to make sure that they aren’t going to work loose once I’m outside. END_OF_DOCUMENT_TOKEN_TO_BE_REPLACED

I stumbled in, mud dripping off my boots, my jacket… well, pretty much everywhere, including a few places that I would rather not share with anyone else. “Faugh!” I declared, spitting on the straw covering the floor around the entrance.

Behind me, Young Henry followed on my heels, although he forewent my exclamation. He’d stuck close, practically my shadow as a round of artillery fell only meters from our position.

“Relax,” I told him, glancing back over my shoulder. “We’re on neutral ground now, lad. Take it easy.” END_OF_DOCUMENT_TOKEN_TO_BE_REPLACED

It’s weird how, in the last few seconds of your life, everything becomes strangely, almost absurdly clear.

For me, that clarity brought with it the realization that all of this, everything that happened, came about because I ignored orders and went for a hike.

And that hike, in turn, happened because of my father.

Not that my father was a bad man, you understand.  No, he was a normal, hardworking, blue-collar sort of guy.  We didn’t have much money, which meant that we didn’t have much in the way of entertainment, and the rabbit-ears balanced on top of the television never seemed to pick up a good signal, no matter how much tinfoil my mother wrapped around them.  So instead of plopping down with Junior and watching the Sunday football game, my father instead took me out on walks.

We might not have had much in the way of digital entertainment, but at least we had some good views.  Not that I appreciated them at the time, being a snotty-nosed brat who felt enviously that my buddy Blake, whose dad sank all his bonus money into a fifty-inch flatscreen with digital HD hookups, had all his luck and most of mine as well.  My dad would bring me up to the bluffs, brushing aside the leaves on the wide-branched trees to make it easier for me.  He’d gesture out at the cliffs, the sky on fire from the setting sun, and he’d ask me what I thought.

Mainly, I thought that I’d much rather be watching football at home, feet propped up on our ratty old couch.

I never told the old man, though.  Why ruin his idea that he was doing his son a solid by bringing him out into the wilderness?  And besides, I picked up a few tricks: how to tell direction from the moss and by cutting chips into the tree trunks, how to move silently enough to sneak up on the gamey rabbits that hopped to and fro, how to follow the trails of animals, how to keep an eye on vegetation and figure out the best route to a nearby water source.  Useful knowledge, not that I knew it at the time.

Although now that I’m thinking back on it, with that newfound clarity that I mentioned earlier, I might have been better off if I’d never learned a single damn thing about the outdoors. END_OF_DOCUMENT_TOKEN_TO_BE_REPLACED

“You’re kidding me.” Muller looked into the interrogation room with her arms crossed tightly in front of her, the glass window reflecting back her disbelieving frown. “You’re really desperate enough to believe in this nonsense?”

“Muller, it’s not nonsense,” Sully insisted, leaning forward slightly as he watched the man on the other side of the one-way mirror fidgeting uncomfortably. “Sympathetic visions are a real thing, and this could be our best lead on catching the Slaughterhouse Killer-”

“It’s disgusting and wrong, that’s what it is,” Muller insisted. She turned and looked past Sully, at the other man in the room. “Senior Agent Hitchens, surely you can’t be on board with this?” END_OF_DOCUMENT_TOKEN_TO_BE_REPLACED