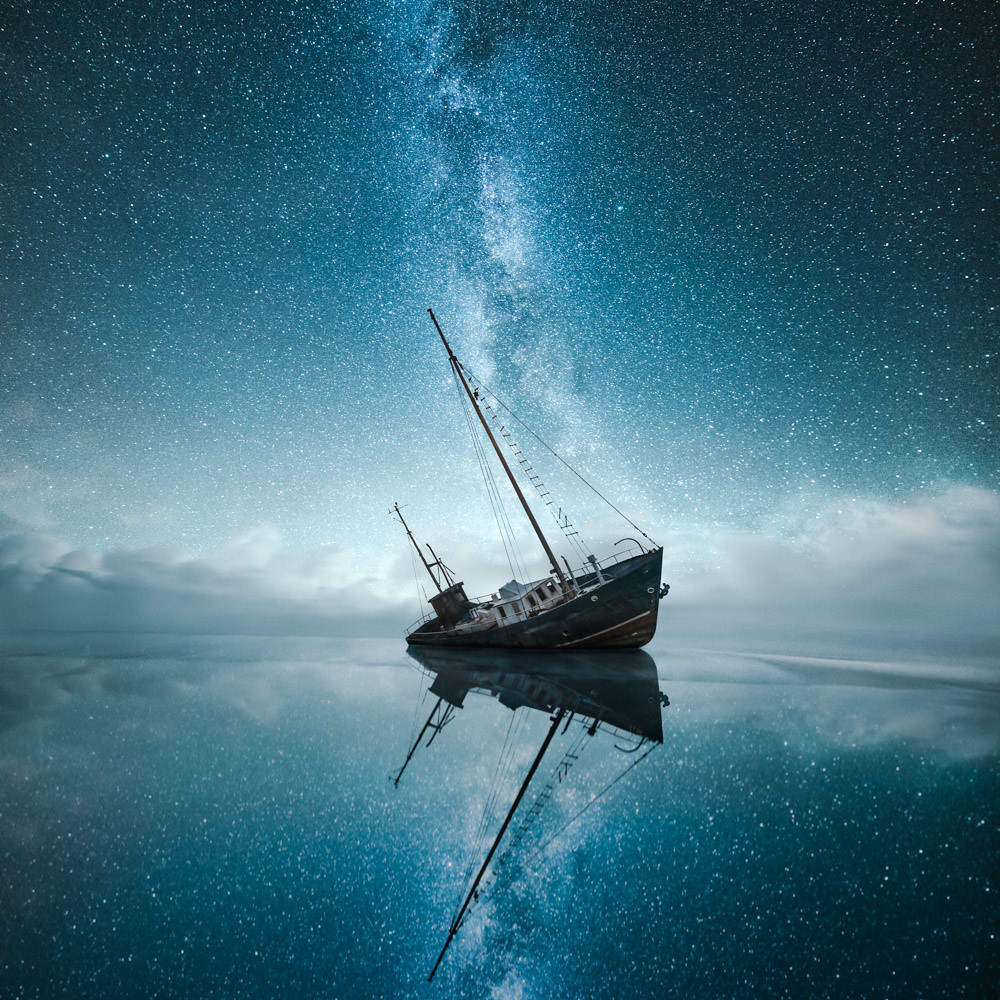 The ship drifted, the deck softly rocking back and forth beneath me.  I could feel the shifting of the rough boards against my back, in gentle constant motion.

Gazing up into the sky, I watched sleepily as the mast rocked back and forth, its motion amplified by the boat beneath me.  Back and forth it swung, tracing a line back and forth across the innumerable points of light on the night sky’s backdrop.

Adrift.  Lost.  The words flitted through my head, but they meant nothing to me.

Almost out of time.

Occasionally, a spark jumped from one of the spar lines, earthing itself in the wooden boards.  My eyes couldn’t help tracking those bright little points of light, but I knew they were meaningless.

The last of my time, burning itself away.

What could they do?  I knew there wasn’t enough energy to jump away.  Adrift, all I could do was wait as the last little reservoir of energy slowly expended itself.

Eventually, I knew, there’d be no energy left.  I couldn’t produce enough on my own to keep the entire ship warm.  Everything would stop, and I’d be frozen, out of time.

There’d be no rescue.  After all, I hadn’t told anyone where I was going.  That’s the point of an adventure, isn’t it?  Brashly, I’d jumped out beyond the bubbles of fast time, out into the far reaches.  I had sought adventure, had been willing to embrace danger.

Had I been foolish? I wondered, feeling my fingers starting to grow colder.  Perhaps.  I’d been told that running out of time felt a bit like freezing to death.  Once it had progressed past the point of turning back, it didn’t hurt, but felt instead just like falling asleep.

Beneath me, the ship drifted.  I didn’t know how it ended up out here, way out in the far reaches of Slow Time, far beyond any civilization.  I’d searched the boat, hoping to find some hidden store of Time that could help me jump back to civilization, but I’d seen nothing.

Abandoned, empty, just another cold place for me to lay as my time ran out.

Slowly, I closed my eyes, crossing my hands across my chest.  I doubted anyone would ever venture out here, into the depths of Slow Time, but I’d like for them to find me at peace.

With my eyes closed, the boat still gently rocking beneath me as the last vestiges of my time burned away, I waited for anathema to claim me.

Suddenly, just as that bitter cold crept up my legs, I thought I heard something.  Some sound, just at the edge of my hearing.  I tried to ignore it, not wanting to stop with my eyes open.

There it was again.

I couldn’t lay in suspense any longer.  Despite the bitter cold of timelessness creeping around my extremities, I opened my eyes.

Another pair of eyes stared down at me.  Blue eyes, brilliant blue, dancing with suspicion, determination – and amusement.  They watched me carefully, watching as renewed time flooded back into me, warming me.

“Well, well.  Not what I expected to find out in the Far Reaches.”  The voice was deep, amused – but on guard.  I could hear the steeliness, beneath the friendly surface.

I said nothing, staring back into those eyes.  Their owner looked down at me for a moment longer, and then shrugged as he turned away.

“Coming?” he called back after me.

I’d planned on freezing, running out of time peacefully out here, but it seemed as though I was destined to end up somewhere else.  Fighting my cold, still half-timeless muscles, I pulled myself up and followed after my new companion.

A few minutes later, the boat came to a gentle stop as the last of its time ran out.  Objects couldn’t hold time well, and the last few sparks of time jumped off of the boat, vanishing into the nether.  With its last passenger gone, the boat cooled into blackness.

Eventually, there was only a dark shape, left forever adrift on the endless sea.