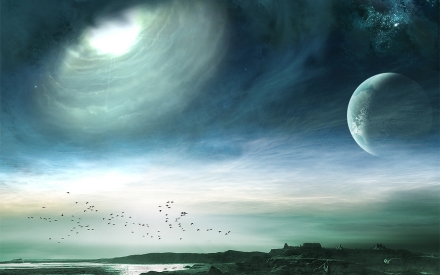 You know, looking back on the whole thing, it’s hilarious. Real gut-buster. And it’s pretty much our own fault.

I mean, we really oughtta have found the thing a lot earlier, huh? What kind of species develops sentience, builds great flying machines, but then decides to spend the next few millennia happily slaughtering each other over minor territorial disputes instead of venturing off their little ball of rock?

And to think, we found it on the damn Moon. Literally next door. It’s a little like murdering all your roommates because you can’t find your sunglasses, and then it turns out that you left them in your car the whole time.

Really, all you can do at that point is laugh. Or cry, I suppose, but I’m one of those guys that gets off on all that morbid reality. Find it hilarious.

So the whole thing just cracks me up. You realize that we first set foot on the Moon back in the sixties? The sixties! Decades ago! Of course, we didn’t look in the right place, which is kind of forgivable. Moon’s a big place, after all, at least when we’re talking about a couple guys driving around in essentially a high-tech version of a go kart.

Yeah, we got up there, drove around, picked up some chunks of rock that looked interesting or something, and then left. And then we didn’t come back for years and years. Just kept looking up at the Moon in the night sky, acting all smug and saying “yeah, we were there once,” and then went back to carving bigger and deadlier rocks to kill each other.

Oh, did I forget to mention them? Yeah, aliens. Extraterrestrial life, although they never showed up to probe us. Even after we found extraterrestrial life, those guys that insisted on the flying saucers and little grey men turned out to just be normal, garden-variety whackjobs.

But aliens, yeah. And way smarter than us, too. Not that it’s a high bar to clear, but we knew it the moment we finally found that machine on the far side of the moon, up near the pole.

Best as we can tell, someone just parked it, waiting for us. No sign of a crash landing. No emergency beacon, really no emissions at all. Just a silent, black machine, keys still in the metaphorical engine. Just waiting for us to throw the switch.

And we didn’t, of course. What, you think we’re that stupid? Wander up to an alien machine of unknown function and just turn it on?

Naw, we brought it back to Earth, first. Then we turned it on.

Lot of debate, that caused. Everyone babbling until the airwaves were clogged, people getting into literal fistfights in the streets. Tension ran high. Remember when they turned on the big particle smasher, everyone thought the eggheads would make a black hole and blow us to kingdom come? Nothing, compared to this debate.

But that’s a whole ‘nother story. Point is, we threw the switch, and pretty quickly realized just what we had, sitting in our collective hands as a species.

A wormhole generator. But not one that we could control, steer, aim, adjust. No, it opened up back to one place, and one place only.

They had sent us a door. And finally, we opened it.

The first expedition that went through, after a battery of robots and tests to make sure that the other side was survivable at all, carried just about every tool under the sun. We had psychologists, as if we could understand the aliens by asking them about their unhappy childhoods. We had precious metals, because nothing wins over an incredibly advanced species like a handful of gold discs. We even brought guns, because the best way to stop a species that builds wormhole generators and sends them out as interstellar doorways is with a good ol’ Peacemaker.

We went through that doorway prepared for just ’bout anything. Friendly aliens. Hostile aliens. Anything from little green men to gigantic blubbering monstrosities with more tentacles than a Japanese schoolgirl can count. We’re humanity, dammit, and we’ll take whatever place in whatever interstellar pantheon we can grasp.

We were prepared for anything – except what we found.

Gone. All of them, just gone. Not that they didn’t leave behind traces – cities, machines we couldn’t understand, art, literature, beautiful sculptures that tugged at the heartstrings as they pained the mind. All of it, still there.

And corpses. So many, all dead. Not dying, not barely clinging to life. Dead. Piles of them, billions. If you gave humanity three more Earths, let them spread and grow and be fruitful and multiply and all that merciful God stuff – and then one day, tired of hearing the constant construction noises, you just snapped your fingers and turned out the lights on everyone.

We couldn’t settle there. That’s not a metaphor, some shit about the Loneliness of Man or anything like that. No, the whole planet carried a feeling of sadness, of loss. Hit you right in the gut, slowly crept through your limbs until they felt encased in lead. Lost a good number of bright young scientists before we understood what was happening. One day, overwhelmed by that sadness sitting heavily on their shoulders, they’d just walk out into the ocean, pockets full of rocks. Or they’d pop a military-issued sidearm in their mouth, pull the trigger. One guy just cut his wrists, like he was back in eighth grade or something.

So, here we are. Humanity. We’ve got a world that’s too crowded, and another one that’s too sad for anyone to survive there more than a month. One with too much life, and one that’s full of dead alien corpses, along with a bunch of machines that we’re too stupid to use.

See, but I haven’t gotten to the funny part yet.

We’ve figured out what killed them. The aliens. Honestly, not that hard, especially when you’ve got thirty billion corpses to hack apart and study. Turns out, crazy as it sounds, they weren’t that different from us. Same organic compounds, other science things that I don’t understand. Similar diets, same kind of vision, same basic blood system.

And the same kind of viruses.

Apparently, they’d never really dealt with viruses or disease before this. The virus wasn’t all that complex, even – just your standard “take over cells and make more copies, while at the same time also killing this host, oops” approach. Once we figured out how their cells encoded information, some weird super-long carbon chain, we found the virus. Even made a cure for it, in case we happened to find one of the guys miraculously alive, whoops, just playing dead this whole time.

Took us about two months to make a cure.

You’re still waiting for the funny part, huh? Well, here it is.

We worked out when they died. Turns out that the whole race went down in barely more than a decade. No immunity, no resistance. Virus appears, and ten years later, the last guy just keels over. So long, alien civilization.

The eggheads determined that the last survivor gave up the ghost and bit the dust about forty years ago. The planet’s been uninhabited by sentients, room for rent, vacancy, for a little under half a century.

Forty years. If we’d stopped killing each other and gone back to the Moon, found the invitation they sent out to us, we might not have been too late. We might have gotten there before Mommy and Daddy simultaneously dropped dead.

Other intelligent life in the universe, and we missed them by forty years.

You gotta laugh at it. Because if you don’t laugh, you’ll soon enough just start crying.