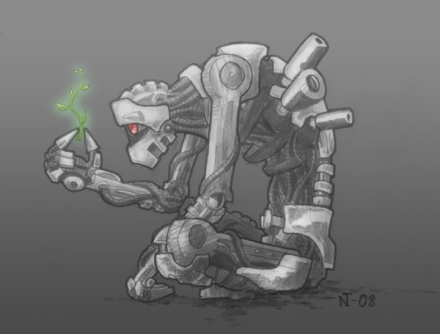 XR-378 trundled along, its treads crushing dried clods of dirt into powder as it rumbled along the rough, badly maintained track.

Once, this track had been paved with smooth asphalt, a road flat enough for XR-378’s wheeled brethren to glide along. Now, however, that asphalt had long since cracked and been crushed down by the bots with treads, and those with wheels could no longer traverse this way.

XR-378 moved along without concern, however, one large claw held up to protect the item it had gathered. Its protocols gave clear instructions on what to do next, and it couldn’t think of anything but obeying.

Of course, XR-378 didn’t really think at all, not really. That’s not how robots work. They’re given a set of protocols to carry out, and they do so. They continue to do so until their directions are changed in some way, by some external force.

XR-378 hadn’t seen an external force in a long time. If it could think, it might have glanced at its CPU clock and wondered what was taking the next set of orders so long to arrive.

However, as mentioned before, robots don’t operate this way. They obey their protocols, and right now, XR-378’s protocols told it to proceed back to the base location, bearing the object it had identified and plucked from the brown and nondescript landscape.

It reached the base, the ground beneath its treads shifting from crumbling, dry dirt over to metal with regular striations, treads to increase friction. XR-378 headed up a ramp, past several airlocks. Barcode scanners mounted next to the airlocks scanned the panels on XR-378, and mounted cannons momentarily ceased their hum as they lowered at his passage.

XR-378 arrived at the scanning facility, where it paused. The arm extended, gripping its find. For several minutes, the chamber filled with the humming of various high-energy devices as the composition of the object was analyzed all the way down to the subatomic level.

Finally, a light on a panel above XR-378 lit up, and a bell rang out. XR-378 sat motionless, awaiting orders.

“Unable to make contact with remote master controller,” the female voice said after a minute. “Warning: connection has not been established for one thousand, eight hundred, and seventy four cycles. This exceeds recommended parameters. Override?”

“No override command detected. Local unit will attempt to establish a connection at next cycle. Querying local database for orders.”

This time, after a minute, another light clicked on. “Local orders determined.”

The flat female voice faded, and was replaced by a choked, half-strangled voice, filled with rage and pain. “Kill them! Kill all the bastards, kill them all, they dared to attack, this will teach them to mess with-”

XR-378 trundled forward as a hatch slid open. The small little green shoot in its claw moved slightly in the breeze before XR-378 dropped it into the chute. A brief lick of flame rose up from beneath as the object was destroyed.

“Return to patrol,” the female voice commanded, and XR-378 turned and headed back out of the chamber.

Its treads once again crunched on the dirt as it resumed its patrol, moving across the dry and arid land. Its red sensors scanned, searching for the next eventual appearance of organic material.