Welcome to How it works, a new and (hopefully) illuminating series on many of the techniques that I, as a biologist, am familiar/somewhat familiar/not at all familiar with!  Read on, but be prepared to learn!

So, in the last How it works, I talked about PCR.  PCR, as you may recall, stands for Polymerase Chain Reaction, and is a way of making a lot of copies of DNA, very fast!  Seriously, once you know your sequence and have a couple strands of the DNA, you can go from 2 strands all the way up to 20,000 strands, all identical, in an hour or less.

But wait!  What about if you want to make a couple small changes to your DNA?  In order to explain this, I’ll lay out a nice, hypothetical example:

You’re a researcher, working on, for example, fingers!  You go out and take a bunch of DNA samples from six-fingered people (this condition is actually called polydactyly), and compare the DNA sequence to that of normal, five-fingered people.  You compare the DNA using sequencing, which will be explained in another episode.

Now, you find that the DNA is almost identical – except in one spot, instead of there being an A in the DNA, you find a T instead!  (Remember, DNA is made up of only 4 bases, A, T, G, and C, combined in long strings, a bit like computer code.)

So, you hypothesize, if a person has a T in this spot on their DNA, instead of an A, they grow six fingers instead of five!  But you can’t just call it quits now – you don’t have any experimental proof, nothing to show that this isn’t just coincidence.  So you decide to do an experiment!

Now, first off, you can’t go around giving people extra fingers (unless you’re a mad scientist or something, in which case feel free).  So instead, you look at mice, and notice that they have this exact same gene.  Great – there’s no problem with giving mice extra toes!

So, you now have 2 different directions your research could take.  You could:

Do you know which path is best?  Here’s a hint: we want the method that doesn’t involve searching through millions and millions of mice, counting toes.  We’re taking door number 2!
As you recall, PCR works by separating the two DNA strands, attaching primers to each strand as starting spots, and then synthesizing the rest of the DNA in the complementary strand, building off the primer.  SDM works almost exactly the same way – but with one difference.  Another primer is included!
This third primer is made to cover the spot where the mutation should occur.  Remember, primers are usually 7-10 bases long, so even with one base in the middle altered (to create the mutation), it will still bind very strongly to the DNA.  It might look something like this: 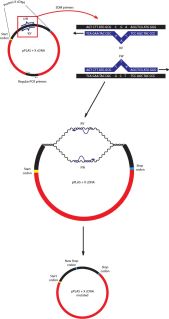 On this picture, ignore the red circles, but look at the two strands of DNA (black lines) with the SDM primers (blue lines) attached.  See how the blue lines have one base that is incorrect, making them kink away from the DNA?  That’s intentional!
Now, after the first round of DNA synthesis, the new strands, made from these primers, will have that mutation, that single changed base, as a part of them!  And because every DNA strand will be made with these altered primers, 99.9% of the DNA from the reaction will be mutated, just as you wanted, instead of containing that original A instead of T.
(Can you see why this process isn’t 100% effective?  If you guessed that it’s because of the original strand of DNA, you’d be right!  That strand is unchanged, and so it will still have the A instead of the T.  Since we’ve made thousands of copies, though, the chances of that original strand being the one used is very low, however, so we don’t worry about it much.)
So after reading this, hopefully you’re starting to see a bit of the power of PCR – not only can it make thousands of copies of a single piece of DNA, but it can also be used to introduce very specific changes at exact locations!  And all of this can happen while you take your lunch break, you productive researcher, you.